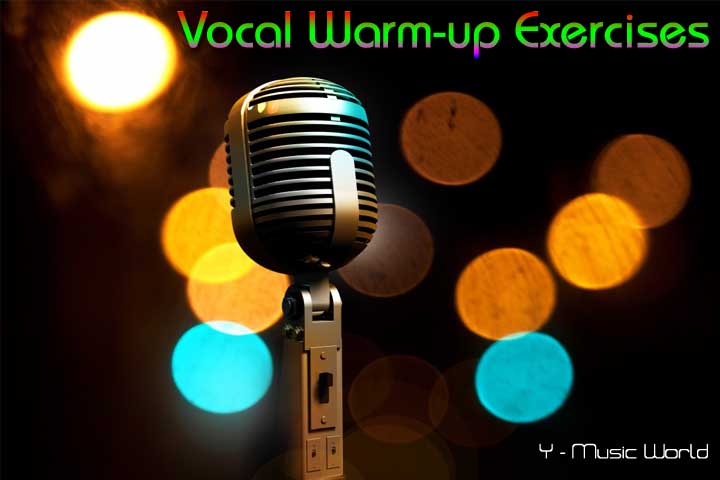 Every physical workout requires warming up beforehand and singing is no different, aside from the fact that vocal warm up exercises will prepare you for a performance or practice session, not for a game or race. They will encourage an adequate airflow and relax your body, protecting your voice from fatigue or injury by increasing flexibility in the small muscles that assist you in singing, giving them more freedom and minimizing effort.

Begin By Stretching and Relaxing Your Body

Before actually warming up the voice, Vocal Warm up Exercises, it’s best to stretch your whole body. The “rag doll” exercise, where you bend forward at the hips after standing straight and shake your arms and head before letting them dangle loosely, is a good starting point in your full-body stretching.

Afterward, you can work on good posture by standing with your feet in full contact with the ground, hip-distance apart, and raising your arms in a circular trajectory until they placed over your head. At that point, you’ll stand on your toes and actively inhale. Follow that with a slow exhale, while simultaneously returning the arms to a comfortable hanging position at your sides and putting your feet back on the ground. Throughout the whole exercise, your chest should remain up and your shoulders back, but relaxed.

Specific Exercises to Get Ready To Sing

The first method used to warm-up your voice can called, among other things, lip roll. It consists in puckering your lips and making them vibrate by exhaling through them, producing a sound that resembles a motorboat. The lip roll is better than using syllables because it reduces the strain that certain vowels can produce and automatically makes you use good breath support.

Slide on a lip roll between three notes, with a fourth interval between them, according to the pattern do-fa-do, where the last note is the same as the first one, and the middle one is the highest. Repeat the exercise beginning a half step higher each time.

Then, you can slide on fifths, starting on the fifth note and sliding down to the base note on a “wee” sound (in a so-do pattern). In the following repetition, stay on the same notes, but slide on “zoo” instead of “wee”. After that, you can go a half step higher, slide on “wee” and “zoo”, and then go another half step higher, until you reach the end of your range.

You may also want to try a descending five-tone scale, where you cover the same interval you used for the fifth slide, but without jumping from the fifth note to the base note. This time, you will sing every note in between (so-fa-mi-re-do), with the syllables “na”, “nay”, “noh” and “noo”, one at a time, going a half step up every time you finish sliding with the four syllables.

Another one of the many vocal warm up exercises you can train with is the descending eight-tonne scale, starting on do and going one octave below that note, accentuating every note in between. You can choose any syllable among “noo”, “nah, “nay”, “nee” or “noh” or even make’ the beginning consonant instead of ‘n’. Try to feel as much resonance as you can, especially ‘on the mask’. Repeat the exercise using the same syllables, but change the note pattern from do-ti-la-so-fa-mi-re-do to do-so-mi-do. Then, you can move up one-half step at a time, on every syllable, until you reach your highest notes.

Finally, there is the octave slide. Begin on the base note, slide to the note one octave above it and go back down to the beginning tone, in a do-do-do sequence. Do it on a lip roll, and start each repetition one half-step higher. This and the many other vocal warm-up exercises described will help you get ready for singing.

Article Tags:
Learn How to Sing
Article Categories:
How to Sing Better