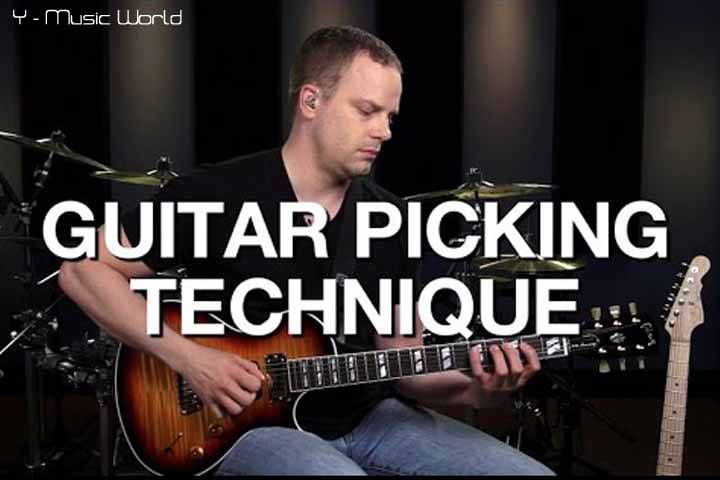 Which one do you pick? (Groan) Guitar picking techniques are a specialist art to many “pros” of the guitar, and yes, they can get very extravagant, but once you arm yourself with the key elements and start back at square one correctly, you will find it much easier to pick up quickly.

In this lesson, we will cover these key elements of good guitar picking techniques. Firstly, make sure you equip yourself with a soft plectrum that can flex over the strings with ease – a hard pick will just make this ten times more difficult than it should be and sound too harsh for this quite delicate style of playing.

This first section outlines the core basics of good picking practice for both acoustic and electric guitar.

Learn to pick with up AND downstrokes. Many guitarists that would not class themselves as beginners at all still only seem to want to pick down towards the ground.

Picking up and down (known as alternate picking) is good general practice and will help developing things like lead guitar and speed picking a much easier ride.

Listen to the audio below and then look at the diagram

You can do this with any chord, but in this example, we are picking the Am7 chord.

If you look at the diagram, you will notice we are down stroking from the root note down to the skinny E string and then coming back up with, yep, upstrokes.

The general “rule” (it’s more of a “make life easier for you” kind of rule) is that the direction of a stroke/pick is determined by where the next string being played is. This directly related to all the following guitar-picking techniques.

Keep that “rule” in mind for each section of this lesson and you will pick things up quicker (no pun intended).

You can rest your palm on the bridge for support in your picking hand. At first, your accuracy will seem bad but try not to look at your picking hand – look at the neck instead! A weird tip, but it works.

Onwards and upwards! Let us get to grips with some solid guitar picking techniques…

Flat-picking basically just plucking the strings of your guitar with a pick. The other method is fingerpicking.

Similar to the warm-up, we’re going to stick with one chord – A7 – but this time we’re going to do some string jumps. This means we’ll start as though we’re just picking down the chord, but 3 strings in we’re going to jump to the top E string to begin our upstrokes.

As you can see (or hear), we strike the two lowest strings of the chord in sync with the rhythm we’re playing – highlighted by the red downstrokes.

That’s what it sounds like stripped down to just those key bass notes.

As long as you keep some sort of strict rhythmic control by identifying a couple of notes that have particular emphasis, you’ll be able to wrap the rest of the chord around it using up and down picks.

Notice how, as I said before, upstrokes are determined by the position of the text string you play to make the travel of your hand smoother.

So we’ll start on that A7 chord like before, using that same picking pattern, but this time we’ll make it into a progression by moving the shape up the neck.

The tab below shows you where to move up.

It’s difficult at first for many people to a) keep your picking accurate at the same time as b) fretting accurately with your other hand.

Again, I would rather you look at your fretting hand because at least the palm and most of your picking hand is stationary. You will find you can naturally be quite accurate anyway with your picking hand

just make sure you downstroke and upstroke when you should be – if in doubt, stop, take a look at what the next string you play will be – if it’s a fatter string, upstroke, if it’s a skinnier string, downstroke (unless it’s the root string, the lowest bass string of the chord – that’s always a downstroke!).

Floating is a technique within flat-picking where you play a couple of notes fretted, and the rest open. The open strings should ring out to create a kind of shimmery effect

With floating, select two or three of the bottom, fattest strings at frets 3,5 and/or 7 and use these as bass notes.

Now, because these notes at those frets are in the key of E minor you can float them up and down the fretboard whilst picking the top skinniest strings. These top 3 strings make up the main part of the E minor chord and will compliment the bass strings played at those frets.

Experiment with playing strings at different frets and picking some of, or all the other strings around them.

Floating is about taking 1, 2 or 3 fretted strings and combining them with picked open strings.

Don’t forget those upstrokes, downstroke rules too! Well, not rules…you know what I mean.

Cross picking is yet another picking technique that sounds more complicated than it really is.

Briefly, cross-picking involves jumping, or “skipping” strings whilst up and down stroking. It allows for more creativity, giving chords more unpredictable patterns.

We’re picking the G Major and C Major chords here, detailed in the tab above.

You’ll notice that the picking follows an alternate pattern, so in the first part I’ll pick the bass/root string as usual followed by the E, D and G string, but in the next part I pick E, G and B. This alternate “1,2” pattern is very common with all guitar picking techniques.

The cross-picking part is obvious – the jump from the bass/root string right up to the top string before jumping back down to the D string. The same upstroke/downstroke “rules” apply here too!

Of course, this can do with chord progressions as well so have a wander around the freeboard with this pattern. Changing chord position whilst your making that “jump” with your cross-picking can sound really good if played right…

Floating chord changes as we saw earlier are not actually big movements in the way of changing your finger formation.

The audio and tab diagram below layout a picking pattern that weaves through a more obvious chord change. When I say “obvious”, I mean it involves physically taking your fingers off the freeboard and placing them on a different chord formation.

Dm7 changes to a modified G chord (FYI: used a lot in jazz). However, the important thing here is, you have kept that picking pattern and rhythm through the chord change (i.e. the chord change did not break up your picking rhythm).

It’s good practice for your accuracy and co-ordination to use this method often, especially when cross-picking because it involves both your picking hand and (more so) your fretting hand making significant movements together and not breaking up the rhythm or accuracy in the process.

Don’t Be Afraid to Keep it Simple!

If you can come up with a melody that you think sounds nice, it does not have to couple with blinding guitar-picking techniques.

The pattern below only uses one string movement at a time, giving it a more spacey feel. Add effects to this and the actual simplicity will not bring it down.

The timings are not regular on this one though, so follow the tab and try to notice the fret changes…

Try hooking all these guitar-picking techniques into a chord progression – float your way through the first few bars and cross pick some defined chord changes for the chorus.

Anyway, hope that has been of some use to you! For more lessons, use the links below.