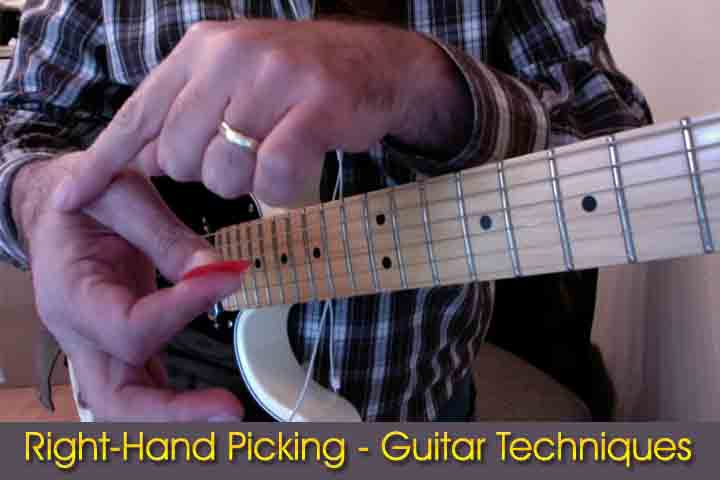 Most of our guitar lessons for beginners will spend a lot of time dealing with what the left-hand does on the freeboard. We will learn in this lesson what to do with your right hand. There are as many guitar-playing techniques as there are guitar players, so attempting to cover all the possibilities would be simply impossible. But there are a few standard guitar techniques that nearly every guitarist will utilize from time to time.

The first set of guitar playing techniques involves the use of a “pick,” which is a flat piece of plastic, vaguely triangular. Using a pick is one of several guitar solo techniques that guitarists use. When one learns how to play lead guitar, it is usually with a pick. However, a pick can also be used to strum a guitar, although it is very easy to break a string when strumming a guitar with a pick if you are not careful. For this reason, using a pick with a nylon-string guitar is strongly discouraged, as it is very easy to damage the delicate nylon strings.

Where the soloist runs the pick back and forth across the strings rapidly, producing a chaotic sound.

One of the most common guitar techniques called muting. This is accomplished by plucking the strings while you gently rest the back edge of your hand (the part you would use to “karate chop” something) on the strings where they meet the bridge. It will take some patience to learn how to play lead guitar with this technique, but you’ll get the right sound when the notes no longer ring, but you can still hear them clearly. This is one of those rhythm guitar and guitar solo techniques that you will use all the time.

Two more common and useful guitar solo techniques are the pick squeal and the pick screech.

Hold the pick so that the tips

The pick squeal usually not covered right away in guitar lessons for beginners because it is a difficult technique to master. Hold the pick so that the tips of your fingers are down close to the tip of the pick. There should be just enough of the pick showing to make contact with the string. As the tip of the pick strikes the string, lightly glance the string with the edge of your thumb. If you do it right, it will make a high-pitched harmonic sound. It called a “pick squeal” because, in the hands of a professional guitar soloist who really knows how to play lead guitar well, a guitar can make to sound like a dying barnyard animal. But this move, like many guitar playing techniques, takes a lot of finesse, and of course, a lot of practice, to get it down precisely.

The pick screech is one of the guitar solo techniques that will make the guitar sound like a howling banshee. To achieve this sound, simply press the edge of the pick against the strings, and scrape it all the way down the neck of the guitar as if you’re scraping paint off the strings. You’ll see immediately why this technique is called the “pick screech”.

Guitar lessons for beginners will introduce you to this technique

Fingerpicking is a technique that used primarily with classical guitar. However, it one of those guitar techniques that can use with any musical style, from folk to heavy metal. Fingerpicking is, as its name suggests, simply the technique whereby one picks the strings with the fingers. It sounds simple, but it’s not. Guitar lessons for beginners will introduce you to this technique, but it takes a lot of practice and patience. Usually, the thumb used to play the bass notes on the low E or A strings, while the index, middle and ring fingers pick out melodies that can be very beautiful and complex. The pinky finger is not usually called for, but some guitarists do use it. It’s a matter of preference.

Here are the opening measures of a piece by Fernando Sor called Op 6 No 8 in C. See if you can play it. Keep in mind that the lowest notes, in this case, the ones on the A and D strings, will be played with the thumb:

Some very dedicated classical guitar players grow the fingernails of their right hand long so they produce a more crisp sound when they play. To achieve more volume, Blues, folk, and Country & Western guitar players use fingerpicks while they play. These small pieces of light metal shaped to fit on the tips of the fingers and thumb.

Some guitarists and bass players just use a thumb pick. Both of these guitar techniques used extensively.

There are some more unusual guitar playing techniques that guitarists use, and that you won’t usually see in guitar lessons for beginners, but may see occasionally as you learn how to play lead guitar. These include the use of a pick attached to the bit of an electric drill. This produces an extreme “shredding” sound that sometimes mimics the sound of a giant dentist drill.

The Lead Guitarist of Led Zeppelin

There are other guitar solo techniques also make the guitar sound like anything but a guitar. Jimmy Page, the lead guitarist of Led Zeppelin, known to play his guitar with a cello bow from time to time. This would produce a ghostly, otherworldly sound that can also produced by using a device called an E-bow. This hand-held gadget that uses electronic impulse to activate the strings. This device can also make the guitar sound like a bagpipe.

Some guitar soloists, most notably Eddie Van Halen, use a technique called “tapping” there the player uses fingers from both hands to hit notes rapidly on the fretboard, it produces a very colorful, energetic sound.

Tapping and “slapping” are guitar techniques that are somewhat similar. The latter used mostly by bass players, but a few guitarists use a modified version that looks like tapping. In this technique, they use the right hand, not to press the string into specific frets as with tapping, but to slap the strings against the fretboard, producing an open, ringing sound.

Your guitar lessons for beginners are a good place to learn standard right-hand techniques, but you will see as you learn how to play lead guitar, that guitar playing techniques are limited only by your imagination.