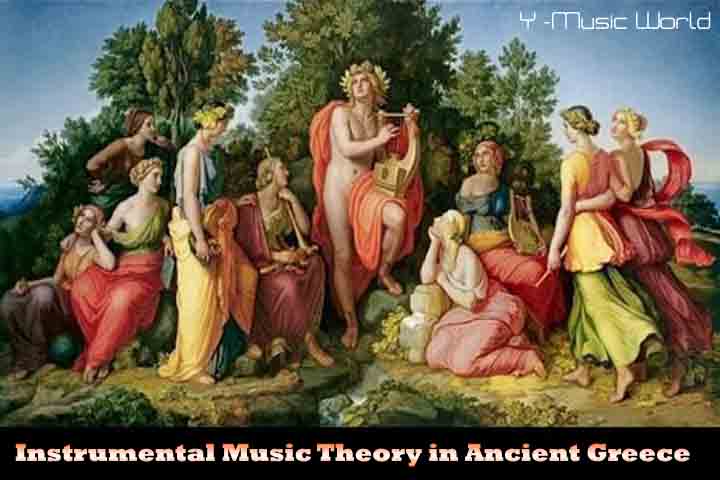 A sophisticated system of instrumental music theory developed in Ancient Greece that still greatly influences music theory today. The Greeks’ commitment to logical thought, abstraction, and classification enabled them to surpass all previous civilizations in terms of musical organization and complexity, and all later generations of western instrumental music would draw from this established base.

Pythagoras usually credited with discovering the perfect intervals on a vibrating string that leads to the first formations of Greek musical theory. No direct writings from him survive, and his followers can only be represented by bits and pieces, but later writers produced treaties on instrumental music theory that we can gain an in-depth understanding from.

Rhythm in music organizationally closely related to that of poetry. Note durations defined as various multiples of a standard unit of time, which mirrors the longer and shorter syllables of Greek poetry. This is unsurprising because music and poetry always linked for the Greeks, both for reasons of performance effect and ease of memorization in times before sophisticated writing.

In terms of pitch, Greek instrumental music separated into notes, each with a different frequency. Two of these notes formed an interval, and a scale considered three or more notes in some type of ascending or descending order. These simple and clear definitions for the basic units of music still exist today and allowed the Greeks to have much more variety and complexity in their music.

By contrast, the Babylonian instrumental musicians had no name or classification for intervals in general. They only had certain names intervals played on certain strings of the lyre or harp. This lack of flexibility no doubt created a more stubborn and limited theory that led to less variety and craft in their music.

Beyond the basic intervals and notes established by the Greeks, they also had classifications called tetrachords. The groups of four notes spanning a perfect fourth that identified by the genus. The three different types called diatonic, chromatic, and enharmonic. The outer two notes of the tetrachords remained stationary while the inner two could move to form the different types.

Variety and Flexibility in Music

These tetra chords could be combined and manipulated in certain ways to create something similar to the way seven or eight-note scales are used today. They based on interval relationships rather than specific pitches or note names, which also provides for greater variety and flexibility in music.

There is a lot more depth to the Greek theory of instrumental music that cannot cover in this article, but music students and composers should study it more closely. Many of the foundations of the western system of music laid at this time, as were many of the foundations for the rest of western life, and musicians looking to increase their understanding of Ancient music and music, as a whole should spend a lot more time on Ancient Greece.