How To Read Music Notes On A Guitar 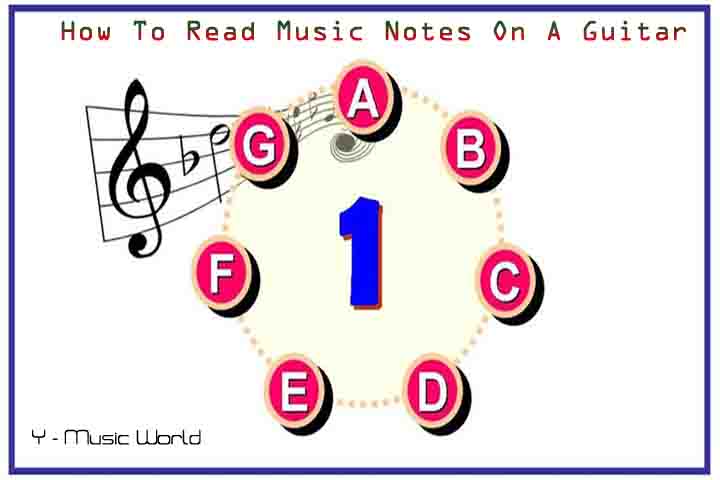 How To Read Music Notes On A Guitar

Unlike the piano, knowing what notes you are playing on the guitar can be a bit tricky to figure out. The piano is obvious actually. It’s easy to see the series of 12 notes that repeat themselves up to the length of the keyboard. It’s a simple repeating pattern:

The guitar is quite cryptic. There is a repeating pattern but it isn’t nearly as easy to spot!

Let’s start with the 1st string (the highest or top string). If you play this string with no fingers down (open), you will hear an E. This E notated on the staff (treble clef) here:

Notes on a guitar E

The diagram above the staff is a visual representation of the guitar. We see the 6 strings running vertically (lowest on the left, highest on the right) and the frets represented horizontally (lowest at the top, higher up the neck towards the bottom). The thick line represents the “nut” of the guitar. This part that separates the playable part of the guitar from the headstock (where the tuning pegs are). The hollow circle at the top means that the string played open.

The next note on the E string will be F. It played with the first finger and is located on the first fret:

Notes on a guitar F

The third note on the first string is G. It played with the third finger and is located on the third fret:

Notes on a guitar G

If you play the 2nd string with no fingers down (open), you will hear a B. This B is notated on the staff (treble clef) here:

Notes on a guitar B

The next note on the B string will be C. It played with the first finger and is located at the first fret:

Notes on a guitar C

The third note on the 2nd string is D. It played with the third finger and is located on the third fret: