How to Play Barre Chords 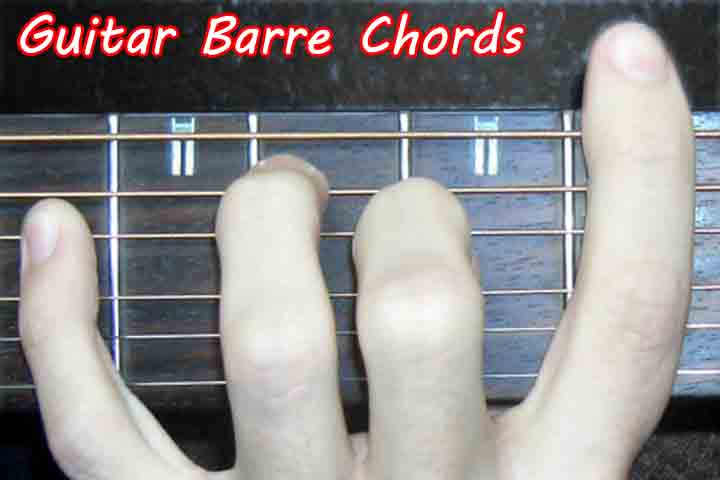 How to Play Barre Chords

Familiarize yourself with different chord positions! Guitar barre chords allow you to keep that familiar chord shapes all the way up the fretboard.

The mistake a lot of guitarists make is to only learn the E-shape and A-shape guitar barre chords and disregard any other shapes, but different shapes accent different note pitches, so it’s of great benefit to open up you’re playing a bit more.

If you want to skip to the diagrams of the different chords you can create with barre chords.

In this lesson, we’ll be looking at the main guitar barre chords from the E, A, C, and D open position formations. If you need to familiarize yourself with the basic open position chords,

When I talk about “E shapes” and “A shapes”, I’m referring back to the E Major and A Major shapes from the open position chords at the first few frets of your guitar. You probably learned these before anything else.

All we’re doing is shifting that chord shape up to the appropriate fret.

Check the diagrams below (Fattest strings at the bottom, like your looking down over your guitar):

Bar your index (1st) finger along the red line and fret the appropriate fingers to create that E shape. Your barred finger is acting as a cappo or a second nut. It will ache at first but will strengthen the more you hold and change between these positions.

There are two schools of thought here – with the open position A shape the top E string rings out – to get the same effect on barred A shapes you need to barre using your index and use the other 3 fingers to fret the 5th, octave, and 3rd, as shown with the red dots.

I don’t bother though, it’s not that noticeable when playing with a band if you just barre those three strings with your pinky or 3rd finger, whatever’s most comfortable. 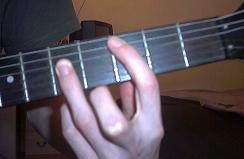 Now, here’s a good little exercise you can do to improve changing between A and E shape guitar barre chords.

The C shape is a little more difficult to grasp at first because of the wider spread of your fingers.

It’s beneficial to use when you want a lower major 3rd high up the fretboard. In other words, it sounds warmer than a higher-toned A shape would.

Again, use your index finger to barre and spread your remaining 3 fingers with the pinky hitting the root F note.

Don’t strum or pick the fat E string as it will ruin the chord (unless the chord you’re playing is an E!)

The hardest part is changing from a position such as the E shape barre chord to the C shape. It just takes practice. 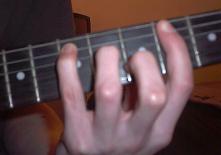 Here’s an exercise that may bore the hell out of you, but will get you changing with precision in no time…

Watch TV or something while doing this, if you can’t be bothered thinking up an interesting melody!

Yep, D shape is next. Now I’m not keen on this one so much – it’s only really useful when you need a high pitched version of a chord. I find any higher than F in this position and it becomes flat sounding and uninteresting.

But it can be, and is, used so I’ll cover it here.

Quite an awkward one this one. Probably the hardest of the major barre shapes to get comfortable with changing around. See the shot below to see how I finger it. 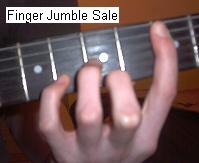 Below is an exercise comprising all the chord shapes above – this will give your fingers a workout.

Start off slow, make sure each string is ringing clearly for each chord, then practice chord changes between the positions.

If you keep practicing the pattern below, your fingers will adapt to such changes very quickly and smoothly.

Guitar Barre Chords – That’s the same as that!

Now we have covered the actual shapes, and hopefully not killed our fingers in the process, it’s beneficial to know where the chord you play can be played elsewhere in a different position on the fretboard.

This makes for more experimental playing and songwriting – you will investigate the fretboard for “better” sounding versions of the chord you need. You will know if it fits or sounds right.

So using the 4 chord shapes above; E, A, C, and D, we’re going to play the GM7 guitar barre chord which is used in jazz, rock and…well, all music really. Has kind of a dreamy feel to it.

Follow the tab and audio below and think about how each position relates to the next for the same chord.

The relationship between the first and third positions in that pattern is the root note is on the same fret and string.

First, identify where the root note is on each of the fat strings, and build the chord upon each one from there – that’s what this pattern has done for the GM7 chord.