It’s worth pointing out that although I’ve put fast guitar picking under the heavy metal category, Fast Guitar Picking to Dramatically Improve Your Strength,  is good to exercise it regularly to build strength and coordination. The heavy metal genre uses fast picking techniques to their extremes, so it’s a useful genre to build strength and timing.

In this lesson, we are first looking at fast guitar picking commonly heard in thrash metal rhythm guitar.

Alternate picking is simply the up-down motion of your plectrum over one single string at a time. Now, I really don’t want to patronize, but are you holding your pick correctly? 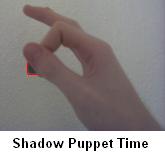 You want to hold the pick firmly and grip it more towards the point so there’s less pick to obstruct the movement over the string. Your index finger should almost cross over downwards behind your thumb because creating an “O” with your thumb and index gives more stability for this type of playing.

For fast guitar picking, you are best off using a thinner plectrum like a 0.6mm – this allows it to flex more easily over the string. A less flexible pick will a) wear out your strings unnecessarily quicker and b) not move as smoothly over the string. 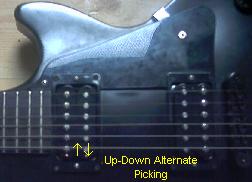 If you’re just getting into this stuff, you should practice this movement regularly. Start on the fattest string, don’t fret it, just play it open, up and down, slowly at first, then gradually build up your speed but don’t lose the rhythm of that 1-2-3-4 1-2-3-4, up-down-up-down, etc.

So, using the same positioning as for palm muting you are going to be applying alternate picking to allow much faster rhythmic playing. Now you have upstrokes to fill in the gaps between the downstroke beats meaning you can play double or triple the speed within the same 4/4 signature.

Listen more of a rock/metal tone and play the sound clip below.

A simple up-down-up-down etc. riff on the fat E string.

This is the good rhythmic exercise for your picking hand at first, not too fast, but enough to keep your alternate picking in a constant, accurate, smooth motion, which is more important than blinding, speed any day, to be honest.

You should also practice this same action on the A string above because you’ll find the positioning of your wrist is slightly different – not much,

The example above is the essence of that “machine gun” sound common in 80’s thrash metal – bursts of rhythmic, alternate picking.

The next step is to look at adding more complex rhythm structures to our machine-gunning, so we are going to…uh…reload. Now I am no expert on guns, but the army trained to fire and reload repeat-fire machine guns in strict rhythm.

We have to do the same – ‘cos it sounds cool. This riff may sound familiar to old-school,

Mr. Hetfield was the master of the machine gun-reload (I could have made you vomit by saying “puppets” instead…) and the above sample is a good example of using alternate picking scratch guitar in-between bursts of power chord to add extra rhythm.

The tab will not give you the rhythm for this – only you can listen, digest, and play the rhythm, but it gives you a good blueprint.

It doesn’t actually matter if the machine-gunning isn’t 100% accurate, as long as those “marker points” are firmly and rhythmically in place!

Keeping your wrist loose and relaxed in the process also helps a lot.

The difference this time is you’re using a scratch guitar to support the climbing melody progression. Listen again and see the tab below for some damn exciting referencing…

If it’s not sounding quite right, i.e. if the machine-gunning sounds more like a string breaking repeatedly, soften your attack and relax a bit.

Pick the string up and down slowly at first and build up speed. Go back to that first audio example on this page and aim to replicate that – it won’t take long.

In the previous examples we have been palm muting, but now we are going to do exactly the same thing but without the muting. This entire means is you should retreat your picking hand’s palm back over the bridge so it’s not touching any strings. It still needs the stability of resting there, but when you remove the palm muting you get this great sawing effect popularized by bands such as Slayer and Megadeth in the early ’80s.

This style of rhythm guitar often used in metal to back the lead guitarist’s solo as it provides this solid undertone melody. This particular example is very typical of a Slayer riff (who eats fast guitar picking for breakfast).

Rhythm is not as important here as the tone rings out and kind of disguises the rhythmic scratching sounds that palm muting highlights, however, you still have to change note at the right time which I’m sure you will gain a natural sense for if not now, soon.

Ok, so we have learned some of the fundamentals of heavy metal rhythm guitar – palm-muted machine-gun riffs, scratch rhythms, and accurate alternate picking.

Let’s put all these elements together into a musical phrase. Look over the tab below and see if you can come up with a good rhythm for it. Remember, the black squares that follow on from the “pm” mean you are using that scratch guitar/machine-gunning technique. The dots underneath the actual power chord shapes signify just strumming that chord.

Hope you have enjoyed this lesson – heavy metal and thrash are good for building your speed and strength with fast guitar picking whether you like the genre or not. I hope you’ll take time out to jam with my online band back on the main heavy metal page below – you’ll be able to play along with a proper metal drummer rather than a click ‘n’ symbol metronome.