Getting started – Basics on Guitar Playing 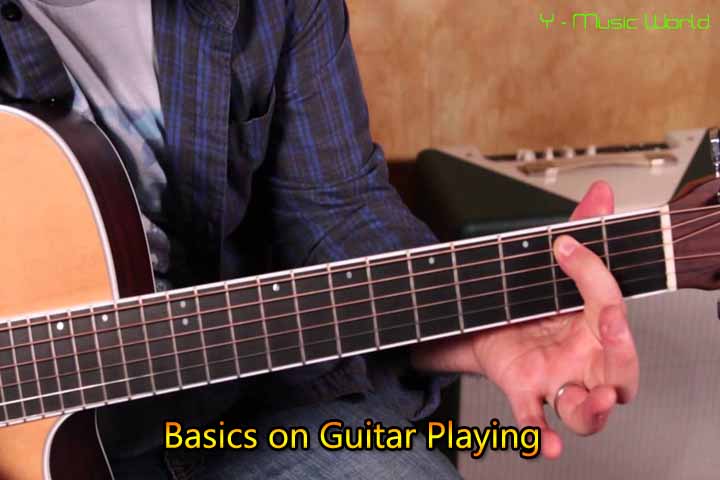 Getting started – Basics on Guitar Playing

How to Sit Correctly

How to Hold the Pick

Holding the pick may seem like a relatively small part of playing the guitar, however, it is actually an important piece of technique. Many guitarists grasp the pick in their dominant hand between the pads of their thumb and index finger. You will find many different ways to hold the pick, however here are a few things to keep in mind.

How to Tune the Guitar

It can help to hum the note between the two string picks. This method will increase your listening skills. You will also need to use harmonics. To achieve the harmonic sound necessary, gently place the pad of a finger against the string on the 12th fret. Does not press the string so that it touches the fret; instead, rest the pad of your finger directly over the 12th fret. Pick the string and you should hear a clear tone.

Do not press too hard when playing a note. Your finger should be slightly behind the fret (towards the headstock).

It is not a bad idea to go back through the strings again at this point to see if they are in tune This is especially true for brand new strings because they tend to go out of tune often.

The left-hand technique is another matter of preference. There is no correct way to place your fingers. In most cases, the style of playing dictates the position of the thumb and fingers. In all cases, it is best to have a qualified tutor examine your technique to suggest changes for improvement. The following is simply a set of basic guidelines compiled from researching many websites. It recommended that you conduct your own research to find a technique, which is both comfortable and effective.

A good way to do this is to ensure that your pinky is very close to the freeboard, as your other fingers should then naturally do the same. The fingertips should be no farther than 50mm (1/2″) from the guitars fretboard.

Each finger should stay directly over the fret, which it is responsible. This minimizes movement, which leads to greater speed. Try to use one finger per fret whenever possible.

Press close behind the fret

Keep your fingertips very close to (but not directly on) the fret. Your finger should be just behind the fret towards the headstock of the guitar.

Press using the tips of fingers

Apply an even pressure close behind the fret using your fingertips. You do not have to press extremely hard, in fact avoid doing so. You will eventually grow calluses on your fingertips helping decrease the initial discomfort you feel.

Try and only have fingertips and the side of your thumb touching the guitar neck. This will allow freedom of movement (reduces friction) as you slide your arm from position to position horizontally.

Pay attention to the thumb

Keep your thumb near the middle of the neck approximately between the first (index) and second (middle) fingers. Do not press hard with your thumb, in fact the less the better. Avoid choking the neck with excessive fret pressure. The thumb should provide stability; the fingers should used to press the string. Keep your thumb straight but not rigid.

Keep the palm parallel to the neck, yet avoid touching the palm against the neck of the guitar whenever possible. Try to keep your wrist arched slightly, but not bent at all from side to side.

Most importantly, do not press too hard against the string and minimize pressure from the thumb. Keep your fingers close to the freeboard.